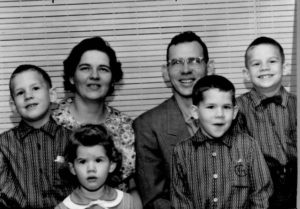 On the way home from church one Sunday Dad announced he had signed up our whole family to do special music the next Sunday. Mom was excited, and Dad was excited, so we four kids got excited too.
Until every night after supper we had to practice Dad’s song. We’d sigh and line up by Dad. Mom played the piano and Dad had us sing Ira Stanphill’s, “Mansion Over The Hilltop”. I think looking back now Dad had in mind more of the Elvis Presley version, but we did the best we could. We sang it and sang it until the lyrics were second nature. But when you’re around six years old a new song is easy to learn.
Dad even had us do some actions on the chorus.
I’ve got a mansion…(“hold your hands up over your head like a roof!”
Just over the hilltop…(“motion back with your right hand and look over your shoulder! No Paul, you’re right hand!”)
In that bright land where…(“cup your hands on the side of your face like your shining!)
We’ll never grow old…(“just shake your finger and your head!”)
And some day yonder…(“keep shaking your finger!”_)
We will never more wander…(“move your hands up and down like feet marching and look side to side like you’re lost!”)
But walk on streets that…(“pretend you’re walking but don’t walk.”)
Are  purest gold!…(slide your hands out to your side, like you’re admiring the pretty streets!”)
Every night after supper we’d rehearse. And it was mostly fun once we got started. Dad talked us up and said we were doing a great job and how proud of us he was going to be with his family singing in church and everything. We enjoyed the praise and did our best but didn’t think about the actual performance.
Then Sunday morning came and after Sunday School our family of six assembled at our normal wooden pew. It was about two thirds to the back of the church on the right hand side as you walked in. I knew where it was and what the faded oak bench looked like and how hard it felt after sitting on it for more than five minutes and even how it tasted. (Kind of like a salty pencil. Sometimes I tasted it when the sermon got too long and I needed a distraction.)
As we were getting organized Dad for some reason looked at my younger brother, Tim and said, “Now, Tim if you start to cry and don’t think you can stop, it’s okay to just come back here to our pew and sit and wait for us. It won’t be long…”
I noticed that Tim’s five year old face paled. His eyes clouded over and I thought, uh-oh. Tim had a unique sound when he cried. It was kind of like an air raid siren going off. He’d start with a low pitched wail that just got louder and higher in pitch as he let go. Whenever he’d cry people would stop and stare. I never knew if they felt sorry for him or wondered if they should be taking shelter?

The morning service moved right along as normal and pretty soon I forgot all about singing but then just before the sermon the preacher happily announced, “And now the Combs’ family will come and sing for us!” The church became quiet with an air of expectation and all eyes focused on us. I felt really hot and my eyes seemed to go out of focus. My feet felt really heavy as I followed my older brother to the front of the church.
Mom was already up front since she had been leading the singing and she switched places with Doris, the regular piano player. I looked behind me and noticed our little four year old sister, Anna smiling and enjoying all the attention on her as she walked up and stood next to Tim who stood next to me and I stood next to Dan. Dad was behind and between us and the piano but close enough to thump me on the back of the head I noticed.
We started out on the first verse, “I’m satisfied with, just a cottage below, a little silver and a little gold…” and everything seemed to be going okay. I stole a furtive glace at Tim and he wasn’t smiling but he wasn’t crying. And then I had to concentrate on the actions as we did the chorus.
Towards the beginning of the chorus as we were shining in that bright land I heard Tim take in a familiar sounding gasp of air. “Oh, no!” I thought. And then the wailing began. As we finished the chorus Tim’s wail was almost as loud as the piano. Dad gave Tim a gentle push and he went running back to our pew. A couple of the older ladies tried to grab him as he ran by but he was too quick for them.
I looked at Dan and he shrugged and I heard Dad whisper loudly, “keep singing!” So off we went on the second verse.
Though often tempted, tormented and tested
And like the prophet, my pillow a stone.
Tim’s crying had subsided a little but when I checked on Dan I could see his eyes tearing up and his chin quivering. Before the second chorus he was crying, too. Dad tapped him on the shoulder and sent him back to the pew. The way Dan looked going to the pew was almost too much for me and I forgot to do most of the actions. I tried my best to not look at both of my brother’s sobbing together on our pew but I couldn’t help but look.
I checked on Anna and I thought she looked a little worried. She was watching me and I tried to smile and then I saw her eyes looking fearful.
Don’t think me poor, or, deserted or lonely.
I’m not discouraged, I’m heaven bound.
Midway into the third verse I couldn’t hold it in anymore and I was crying. I wanted to run out of the church and when Dad’s hand tapped me on the head I took off running  and dodging the hands of the old ladies trying to help comfort me. I made it to the pew where Dan and Tim were now sniffling. I tried to hide by crawling under the pew but Dan pulled me up between him and Tim.
The third verse was ending and I could hear Anna crying and looked up to see her whisking her way back to her brothers. She tried to climb on top of all of us and we sat huddled together watching Dad sing the last chorus all by himself. He even did all the actions and I thought for sure he’d start crying too, but he didn’t.
On the way home from church Dad was in a jovial mood and Mom asked Dad if he thought he was going to cry, too? Dad said he would have but he didn’t want to leave her in the front all alone. Then they talked about us singing as a family in church again, but a chorus of loud “No!”s came from the back seat. Dad laughed and said, “Well…The Combs family will probably never perform together again.”

Since our family’s singing debacle I’ve played and sang “Mansion Over The Hilltop” many times and have often pondered the lyrics. The words I like the best are right at the beginning.
I’m satisfied…
Psalm 107:9 (NKJV)
For He satisfies the longing soul,
And fills the hungry soul with goodness.