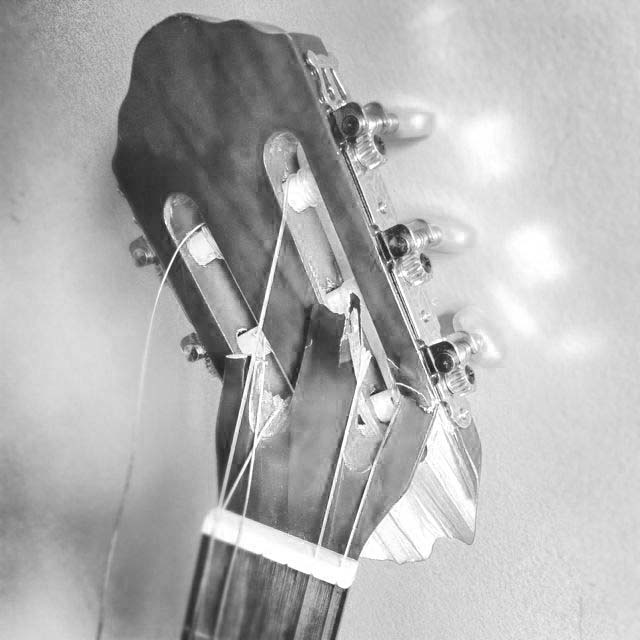 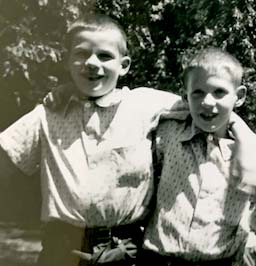 It was late on a cloudy afternoon and Mom had taken our younger brother and sister somewhere leaving my older brother, Danny and me home alone. Being about six and eight we were having lots of fun running and jumping and screaming in the house and doing all the things we weren’t allowed to do when there was parental supervision.

The house wasn’t really designed for the antics of small boys and we ended up in the living room. There were several things we knew we shouldn’t jump on or run into in there. We tried our best to avoid them. Honest. Like Mom’s piano and the television set and then our family’s newest acquisition, a guitar.

“I know,” Dan said, sounding proud of himself. “I’ll move the guitar so we don’t break it.”

“Yeah!” I agreed with enthusiasm. “And I’ll push in the piano bench so we don’t bang into it.”

“Right.” Dan said as he laid the guitar on the couch. “Good idea.”

I shoved the piano bench a little too hard and it slid under the piano keys into the piano. “Oops!”

Dan ran over and inspected the finish on the piano and the bench. “No scratches.” He surmised. “At least not any new ones.”

With the room supposedly ‘kid safe’ we resumed our game. “This time you be the jungle monster,” Dan said, “And I’ll be the explorer.” I handed him Dad’s 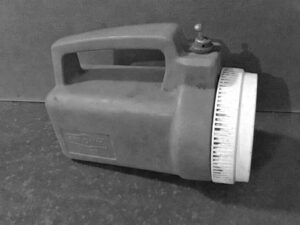 flashlight that we really weren’t supposed to play with.

We turned off the lights and then I hid behind Dad’s chair. Danny walked into the living room, shining Dad’s flashlight this way and that, pretending he was in a jungle, exploring. Just as he stepped close to Dad’s chair I jumped out with my best jungle monster roar.

“Aargh!” I hollered while raising my arms.

“Ah!” Dan screamed and ran this way and that to avoid me while we both ran around the living room giggling until Dan tried to spin while standing on the newspaper. His feet flew out from under him and he hollered, “Whoa!” as he hit the floor.

“You okay?” I asked as Dan sat up laughing.

“Yeah. Guess we should move the paper.” He picked up the pages and set them on the piano bench. “There!” He said. “Now you be the explorer.”

“Okay.” I said, relieved Dan wasn’t hurt. I grabbed the flashlight and ran into the kitchen and waited.

I started shining Dad’s flashlight around the room and entered in my best imitation of an explorer. “I hope there’s no grillas or jungle monsters.” I said with a giggle.

As I got closer to Dad’s chair Danny jumped out and roared at me. Laughing I jumped high landing in the chair on my knees, and he thought that was funny. “Do it again!” He squealed. I ran back and came in and Danny jumped out with another roar. We were laughing so hard we could hardly stand up. “One more time.” He got out.

“Here I come!” I shouted as I marched into the living room again. I was laughing with excitement and anticipation and Danny was giggling behind the chair.

“Argh!” He roared once more and I screamed. Then I got an idea. This time instead of jumping on the chair, I’d fool him and jump on the couch.

I flew into the air and watching Dan’s face I saw his eyes getting wide with surprise. I looked down just as I landed on the guitar which broke into pieces with the strings twanging and wood and plastic cracking. 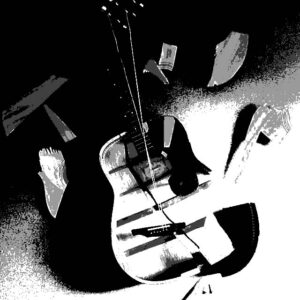 “Ouch!” I hollered as my knees smarted from the contact with the guitar instead of the couch cushions.

Dan ran over to the couch and the house was filled with an eerie silence as our realization of what just happened stopped our childish game.

“Yeah,” I said as I tried to fit pieces of the guitar back together. “It’s really smashed.” I said. “What’s Mom going to say?”

“And what’s Dad going to do?” Danny said as we imagined the punishment awaiting us.

“Why didn’t I just jump on the chair again?” I sighed feeling awful guilty.

“Why didn’t we go outside to roughhouse?” Danny nodded.

I felt bad for Danny, knowing it was mostly my fault. I tried to think what we should do.

“We could run away…but no…” He started to say.

“I know!” I said, trying to sound enthusiastic. “We deserve a punishment. What if we punished ourselves?”

“How?” Danny asked with a frown. “You mean we give each other a spanking?”

“No…” I said. “No.” I didn’t think that was a good idea. “I know. We’ll punish ourselves by making ourselves clean our room.”

Danny was quiet for a minute. “Hey! That might work. Then Mom and Dad won’t have to punish us cause we’re already punished.”

We put Dad’s flashlight away and ran into our room and went to work. We made our beds and put away clothes and toys. It didn’t take too long, since we didn’t really have very many toys. We looked around and wondered what else needed to be cleaned. “We better do a really good job,” Danny said as he started picking up all the scraps of paper and broken crayons and mismatched socks. He even crawled under his bed to look for more.

Soon we had all the big scraps in the trash can and I sat on the floor picking up tiny scraps of things wondering how they got there. Our anxiety increased as we could hear Mom coming into the house.

“You think we punished ourselves good enough?” Danny asked as we looked around the room.

We went out slowly and walked up to Mom taking groceries out of a sack. “What have you been doing?” She asked as she looked at us with a puzzled look.

“Mom,” Danny said with a shaky voice. “We broke the guitar.”

“What?” Mom stopped taking groceries out of the brown paper sack. “What happened?”

“It was my fault.” I volunteered. “We were playing and I forgot where it was and I jumped on the couch and the guitar was there.”

“But we punished ourselves…” I added.

“We cleaned our room.” Danny said.

Mom’s face broke into a smile. “You what? Punished yourselves?”

Danny and I nodded. I felt all out of breath.

Mom walked into the living room where the pieces of the guitar still lay on the couch. “Oh, goodness. You did break it.” She didn’t seem very upset and Danny and I looked at each other a little confused.

“Will Dad be mad?” I finally asked.

When Dad came home and he heard the whole story he had us come into his bedroom. We were not sure why and we walked in very hesitantly.

We nodded up at Dad.

“The guitar was more like your toy and I’m not going to punish you for breaking it. But I don’t want you roughhousing in the house any more. Do you understand me?”

Danny and I looked at each other. “Yes,” We nodded.

“I think losing your guitar will help you to remember what happens when you don’t mind.” Dad added. “Now get ready for supper.”

As we walked to the bathroom I thought about how we did something wrong and tried to fix it by ourselves it but really we had to wait for Mom and Dad to settle it. We really couldn’t punish ourselves.

Danny and I went in the bathroom to wash our hands and he looked at me as water splashed over our boyish fingers. “You know, Paul. I think we cleaned our room for nothing.” And we both giggled.

Ephesians 2.8 For it is by grace you have been saved through faith, and this not from yourselves; it is the gift of God,

Romans 4.5 However, to the one who does not work, but believes in Him who justifies the wicked, his faith is credited as righteousness.

Acts 16.31a So they said, “Believe on the Lord Jesus Christ, and you will be saved,