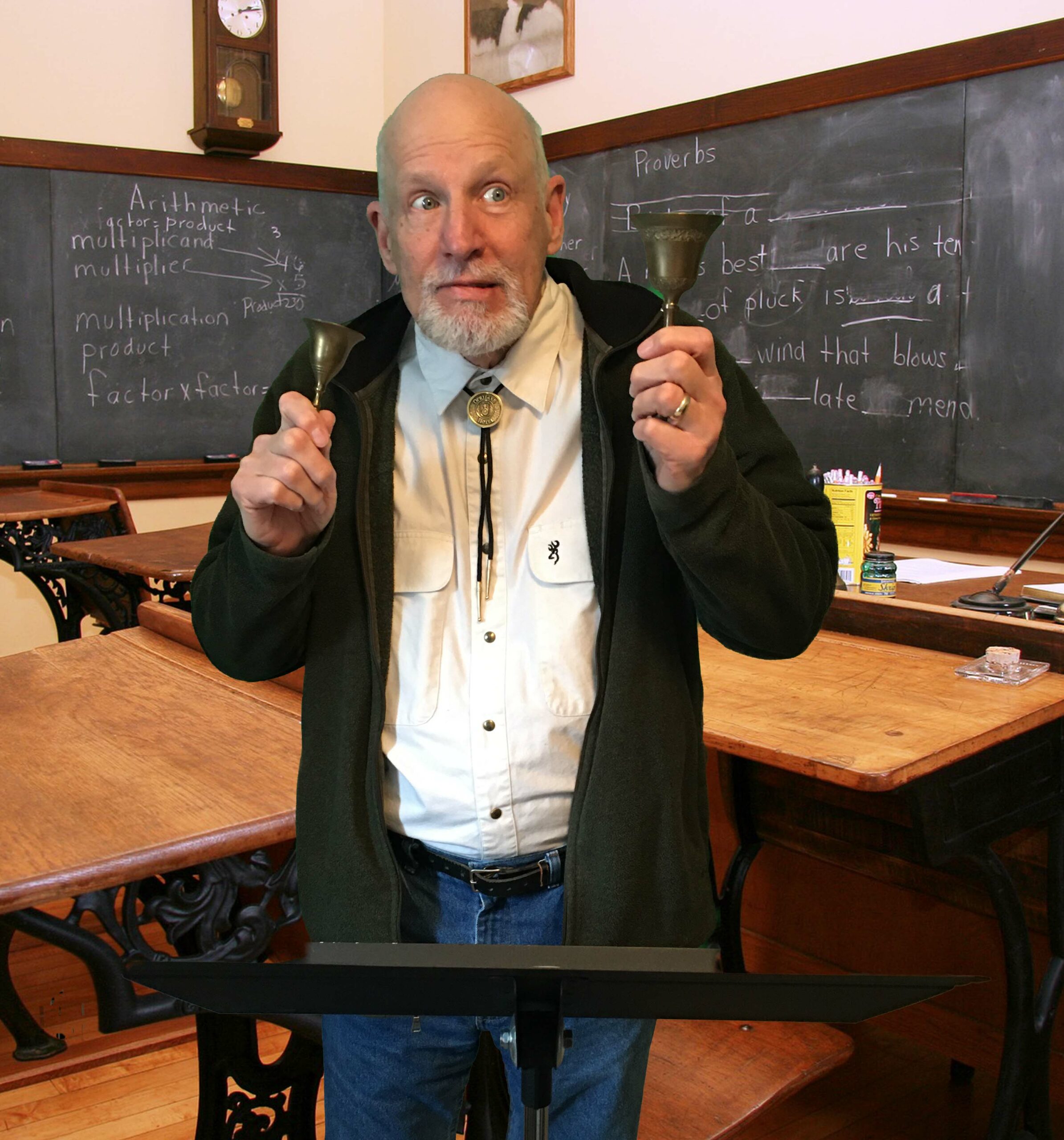 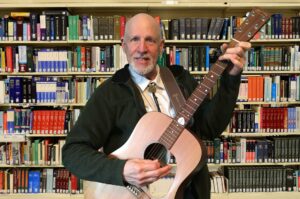 Growing up I had to audition for things. I did my best and maybe a time or two I got the part, but usually things didn’t go my way. I usually made an impact though. In one way or another.

In fourth grade our teacher, Mrs. Kabisky announced that for the end of school assembly she wanted our class to be a pretend band like the Beatles and we would hold guitars, lip-sync and wiggle around while she played a Beach Boys record. I think it was the song I Get Around. She even had a name for us: The Crickets. Of course nobody knew about Buddy Holly’s band already being The Crickets. So we all went along.

Mrs. Kabisky asked for volunteers to be wiggly guitar players and backup singers and girl dancers. Just like the Ed Sullivan show. Well I was pretty excited but I wasn’t in the first group of guys auditioning to wiggle and hold a guitar. Everybody wanted to be in the band.

Johnny got to be one, mostly because he had a guitar and then there was one more spot to go with the other guitar. My best friend Tommy tried out and as the music started he tried his best to wiggle like a pop musician but he got self-conscience and couldn’t quite bob in time. I was doing all I could to help him by wiggling and bobbing and jauntily snapping my fingers and finally Tommy said, “Let Paul try. It looks like he can do it.”

Mrs. Kabisky had me come up in front of the class and take the guitar from Tommy. When I turned around and saw all my classmates watching me and the cute girl rolling her eyes at me I began to feel pretty self-conscience myself. I soon realized I couldn’t bob my head, lip-sync, wiggle my hips and tap my foot all at the same time. And it wasn’t too far into the song that Mrs. Kabisky stopped everything and replaced me. And that was the end of that audition. 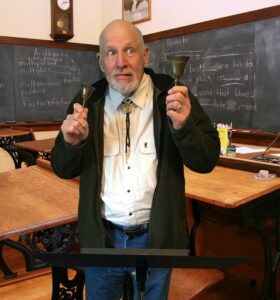 A year or so later I tried again. We had this interesting music teacher named Mrs. Dutton. She was an older lady that played piano and taught us songs and put together recitals. For some unknown reason she didn’t seem to care for me. I didn’t mind, though. She didn’t seem to care for most of us and at times I was guilty of misbehaving simply to arouse her ire. It usually came out in a stern scolding. And she didn’t always seem to know just exactly who I was. She called me Tim a lot, which as everyone knows is my little brother, not me. Of course we did look alike. But I was much better behaved, honest.

Anyway Mrs. Dutton somehow got hold of these hand bells she wanted to incorporate into a couple of songs for our next Christmas program. One by one she had those of us who said we could read music come up and ring a bell when that note came up in a song. I guess I got lucky because she assigned me to play the E bell while we sang Silver Bells.

On the first run through we came to the part where we rang the bells. I was sure I played mine perfectly. But Mrs. Dutton stopped the song, looked at me and said, “Tim, if you can’t play your note right I won’t have you playing in front of everyone! Try it again.”

Well now I was a little nervous so I didn’t worry about singing but was reading the music and waiting to ding my bell when note E came along. Once again I was sure I did it right but Mrs. Dutton stopped again. “Tim! Give your bell to Wendolyn! You won’t be playing my bells!”

Wendolyn looked at me with raised eyebrows and shrugged her shoulders as I held out the bell. She took it and then rolled her eyes as I shrugged my shoulders and stepped back to the non-ringers. I had flunked another audition. In 7th grade our physical education coach was getting us boys ready for the annual Ford County all school track meet. And since we were in 7th grade now we had a few new events we could compete in. Mr. York wanted all of us to try out the discus and shot put. I think we could throw the javelin and do pole vaulting too, but Mr. York didn’t want some of us throwing a javelin when he was close by.

He had an athletic boy from my brother Dan’s 8th grade class demonstrate the discus. First Mr. York lined the rest of us up along the side of the school building. Then the 8th grader took the discus and spun around like discus throwers do and released it and it traveled a ways out into the playground. Mr. York repeated this a couple times because he knew some of us had trouble paying attention.

I was pretty sure I knew what to do and as the other 7th grade boys took a turn at throwing it, Mr. York wrote down how far each could toss the thing. When it was my turn I stood in the throwing circle and looked back at the line of boys along the wall behind me. My brother Dan was laughing and discussing the fall of Rome or some such world event with his intellectual friend. Then I spun around with the discus and released it. 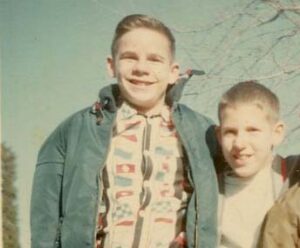 It didn’t go out into the playground. Somehow while I was spinning it slipped off my hand and flew out backwards heading straight towards Dan’s head. I turned just in time to see Dan duck and the discus bang into the school wall and bounce between his legs and land in front of the row of boys.

There was quiet for a moment and then everyone started laughing and making jokes about me trying to take out my brother. Mr. York wrote something down on his clipboard next to my name. Probably something about a negative distance that disqualified me forever from the discus event and to keep the javelin out of my hands.

I sheepishly returned to the line and watched the rest of the boys take a turn. I noticed nobody else flunked the audition by throwing it backwards.

Now I did get to throw the shot put  and it went it further than the other boys. When I competed in the Ford County all school track meet I took 4th place and came home with a ribbon. But never again was I asked to throw the discus.

One might think I’d give up thinking about auditions but one might be wrong. I was just thinking about how Jesus Christ came to be the perfect sacrifice for our sins.

1 John 2.2b says that Jesus was the sacrifice for our sins, and not for ours only but also for the whole world. And in Mathew 1.21 we read, “And she will bring forth a Son, and you shall call His name Jesus, for He will save His people from their sins.”

1 Timothy 2.5 says, For there is one God and one Mediator between God and men, the Man Christ Jesus. Only Jesus could pass the audition to be our perfect sin sacrifice. As Acts 4.12 puts it. “…there is no other name under heaven given among men by which we must be saved.”

And who passes the audition to qualify to be saved by Jesus? Any who need a Savior.

We see in Romans 3.23, “for all have sinned and fallen short of the glory of God.”

And again in Ephesians 2.12 at the end of the verse we see that to live without Christ is to be, “having no hope and without God.”

So we pass the audition for being needy when we realize who we are in Romans 5.6b, “Christ died for the ungodly.”

And I’m looking forward to what my auditions have shown me. That soon I will be presented before God by Jesus as, “holy and blameless, and above reproach in His sight.” Colossians 1.22

I’m so very thankful for Jesus because I read in Hebrews 7.25, “He is able to save to the uttermost those who come to God through Him, since He always lives to make intercession for them.”

All my auditioning leaves me with a bright future in Jesus and I look forward to it.

Jude 1.24, “Now to Him who is able to keep you from stumbling, and to present you faultless before the presence of His glory with exceeding joy.”

That will be glory!

Acts 10.43 “To Him all the prophets witness that, through His name, whoever believes in Him will receive remission of sins.”