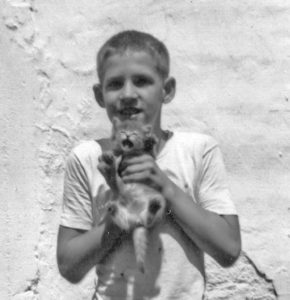 Back in the old days, when I was about 9 where we lived the neighbors ran cattle and kept horses. We had a pony and chickens and there were always stray animals coming and going. I loved all the animals, the only problem was I seemed to be allergic to them and everything they ate.

One day a stray Siamese cat was in our yard. My sister discovered she was a cat lover and took right to it. She still is a cat lover and usually has 3 or 4 cats in her house. I think that’s called a cat herd. She named the cat Snow White; Snowy for short. She would hide in an old shed and that’s where Snowy would be if we went looking for her.

One morning my brother and sister came running in the house and announced Snowy had had kittens. We were excited and ran out to the shed to peek at them. There were four cute, little kittens with tiny ears and closed eyes. One for each of us.

Soon the kittens ventured out of the shed and we spent the day debating over which kitten belonged to which kid. Anna chose the dark calico colored kitten and Tim was thinking of the light gray one but somehow I talked him out of it by reminding him I was his big brother. So he took the black one with a white throat and a white tipped tale and Dan took the other mostly black one. 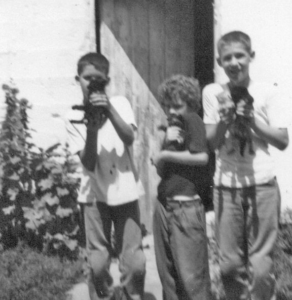 We started deciding on names and wondering if they were boy or girl cats. We couldn’t tell for sure so we just voted on it. Tim named his Charcoal. And I named mine, Ashey. Anna decided to name hers Scratchy because she kept scratching her. I think it was because she held the poor kitten backwards and upside down. Dan was rubbing his chin and thinking. Finally he announced his kitten would be called, “Sirius Arcturus Nebulae!” He was into science fiction and astronomy much more than cats. 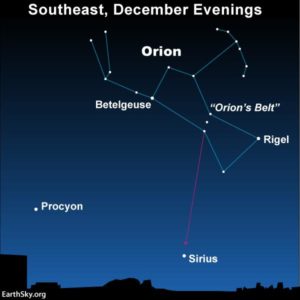 We enjoyed playing with our new feline friends. My sister put doll clothes on Scratchy and pushed her around in a doll carriage which resulted in more scratches. When Dan came outside Sirius would play or sit near him. Tim was always busy but he’d check on Charcoal as he went by. I tried to take Ashey with me everywhere and soon learned that kittens needed to be on the ground on occasion. But after I put on a clean t-shirt I sat in the wheelbarrow and talked to Ashey while she purred on my stomach. I got very attached to that fluffy kitten.

One day I heard Snowy meowing non-stop and I went to see what was the matter. Laying in the grass next to her was Sirius. Something had killed the poor kitten. Dan didn’t seem too worried and some friends were over so we spent the afternoon ceremoniously burying Sirius under a tree in the backyard. Well with as much ceremony as a group of adolescent boys can muster.

Soon Tim announced something had happened to Charcoal. We went to check but it was too late. Tim had already buried him in another spot out in the back yard where Charcoal’s white tipped tail was sticking out of the ground. One of us finally put a shovel of dirt over the tail. 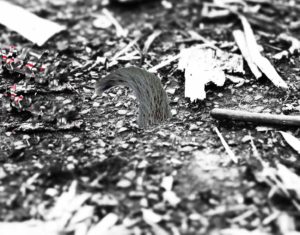 One evening I noticed that Ashey wasn’t herself and gagging. I told my Mom and she thought a bowl of warm milk might help. Ashey seemed better as she lapped it up. The next day I was anxious to check on her.

As soon as I could I ran out and found her underneath the chicken coop where she liked to hide. I put my hand on her leg to pull her out and she was stiff and dead. I looked at the poor cat and ran in the house and locked myself in the bathroom. I kept picturing her alive and well and each time I thought of her I started to sob. She was gone and I desperately wanted her back.

It was my first close up experience with death. It was very hard. I missed Ashey and wanted her back. Since that time, I’ve lost not only pets but also friends and family members. But I am glad that even in death we can have hope.

The hope is found in a person, the Lord Jesus Christ.

Jesus is our hope. He is the one who gives meaning to life even in the midst of death.

Jeremiah 17.7 NLT
“But blessed are those who trust in the Lord and have made the Lord their hope and confidence.

My hope is in Jesus and not in this world. And because I have hope I can go on, even though I grieve those I have lost.

1 Thessalonians 4.13 NLT
And now, dear brothers and sisters, we want you to know what will happen to the believers who have died so you will not grieve like people who have no hope.

Each year we remember the resurrection of Jesus and the sure hope of a resurrection for ourselves and all those who died believing in Him. So even though I may never see Ashey again, there is a sure hope for a reunion with those who have died in Jesus.

Eventually I went out and dug another hole in our backyard where Ashey liked to sit in the sunshine and covered up her still body. My sister hugged me as she held Scratchy, right side up for a change. And we discussed how cats didn’t really have 9 lives. 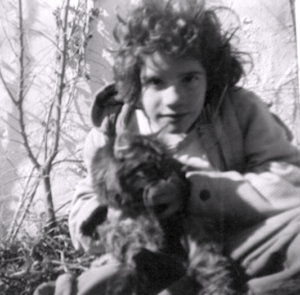 1 Thessalonians 4.14
For since we believe that Jesus died and was raised to life again, we also believe that when Jesus returns, God will bring back with him the believers who have died.