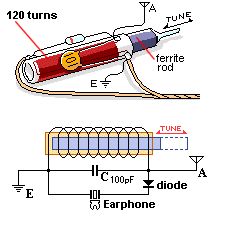 My 14 year old grandson is collecting computer components so he can build his own computer. I’m quite proud of him, as you can imagine. I remember when I was his age and decided to do something similar. I announced it to my older brother and younger brother but they quickly dismissed me. 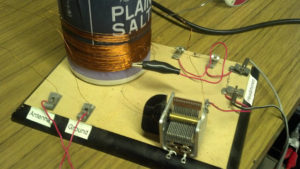 Back then boys didn’t build computers but we did build crystal radios. My two brothers had already built their own crystal sets and knew all about them. But I’ve always been kind of a late bloomer. Anyway I dug through some of my Dad’s amateur radio magazines until I found an article on how to build a crystal set with a schematic and list of parts. I wasn’t really sure how to follow the schematic but lucky for me there was also a picture of the finished project. 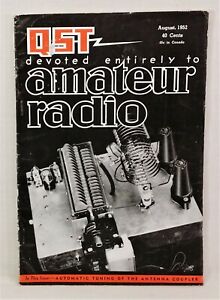 Dad had a treasure trove of new and used electronic parts like resistors, capacitors, variable capacitors, potentiometers and chunks of circuit boards and strands and strands of wire, solder and a soldering iron so I went to work gathering this and that and I even found the all important, brand new never been used diode. You know, the crystal. 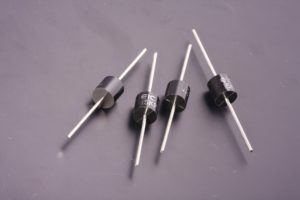 I set to work mounting the components on a board and connected them with Dad’s soldering iron and bits of wire. When I finally got through I thought it was quite impressive. I could just imagine my little radio pulling in the St. Louis pop radio station and listening to KXOK’s Johnny Rabbitt’s Go-Go Show. It was my favorite station back then. 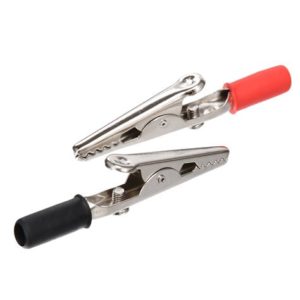 I hooked up the long wire antenna that Dad had hanging up in some trees and reaching into the basement. Dad was always good at stringing wires up in trees and on roofs. He also had a ground wire coming through the basement window that I put where I thought the schematic said. I clipped on Dad’s nice headphones with alligator clips and…nothing. Something was wrong. 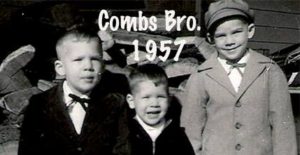 Well in my youthful enthusiasm and ignorance I decided my project needed a creative change of pace. I took everything off and put it all back together my way without following the schematic or diagram. I even included some colorful resistors (the colored bans on the resistors tell you what the ohm values of the resistor is. Yeah I don’t know what that means either) and fat capacitors with strange numbers and symbol markings on them, just for fun. Now it looked even more impressive. I hooked up the antenna and ground and clipped on the headphones and voila’! I heard a radio station. It wasn’t KXOK but it was something.

I discussed my new invention with my brothers and we went in the basement and examined my creation. We couldn’t figure out what made it work. Dan, my older, wiser brother with an analytical mind (not like mine), suggested I remove one component at a time until it quit working. Then I’d know for sure what was making it work.

After a quick snack, lunch, some cookies and a TV break I went to work. I took things off the circuit board one at a time, listening through the headphones to the radio station that was still going, talking about farm stuff or weather or something I thought was quite boring. Until at the last I was down to the brand new diode, AKA the crystal. On one side was the antenna and the headphone lead and other the end was the ground and the other headphone lead.

I went looking for my older brother and announced my results. He scratched his head and said, ‘Well, I guess you boiled the crystal radio down to it’s bare essence.’ I looked at my pile of components that didn’t help me hear my radio any better or allow me to switch stations either and thought of what Dan said. Later I found the dictionary he kept in his room and looked up bare essence. Of course I learned that ‘bare’ isn’t the same as ‘bear’.

Essence:the basic, real, and invariable nature of a thing or its significant individual feature or features

So the exposed, basic nature of a crystal radio is the crystal; the diode hooked up correctly to antenna, ground and earphone. It was an aha moment for me.

The gospel was given to the Apostle Paul by the risen Christ, Galations 1.11-12
I want you to know, brothers and sisters, that the gospel I preached is not of human origin. I did not receive it from any man, nor was I taught it; rather, I received it by revelation from Jesus Christ.

And by putting our faith in the bare essence of the gospel of Christ, written down by the Apostle Paul we have salvation from our sins and eternal life with God. Romans 3.23-24
For all have sinned and fall short of the glory of God, and all are justified freely by his grace through the redemption that came by Christ Jesus.

Romans 5.1
Therefore, since we have been justified through faith, we have peace with God through our Lord Jesus Christ.