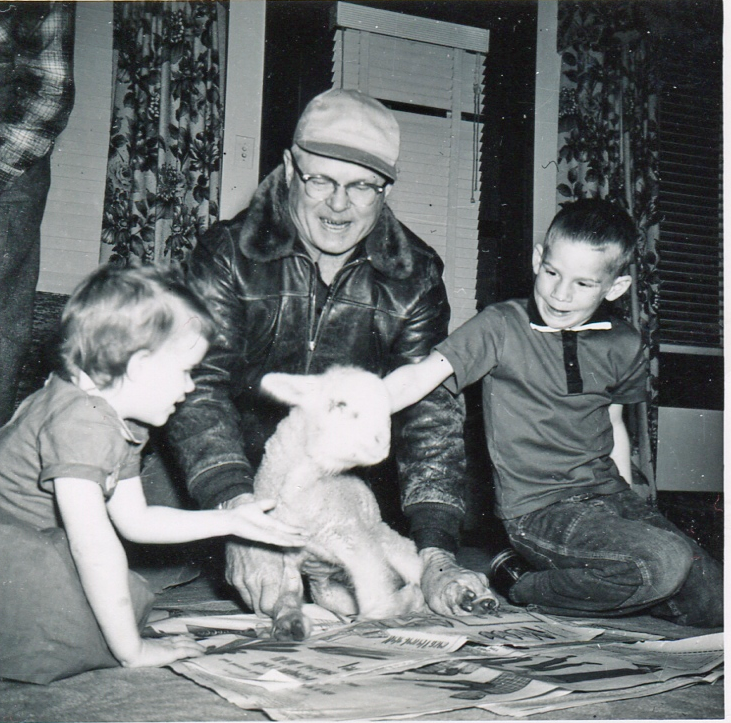 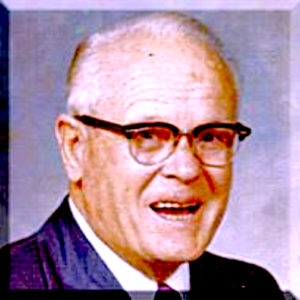 My Grandpa would often tell tall tales with a twinkle in his blue eyes. Like the time he told me I needed to teach our young rooster to crow. I kept trying to get that little rooster to catch on by crowing at him and I was so excited the day he crowed on his own. I figured I had quite the rooster crowing teaching ability. 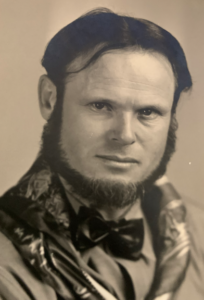 My grandparents had a small farm in Oklahoma when I was growing up. They had a big garden, fruit trees, a root cellar lined with jars, chickens and a small flock of sheep. On our visits it was a big treat to go with Grandpa out in the pasture to the chicken coop to gather eggs. He would always caution us about the ram. 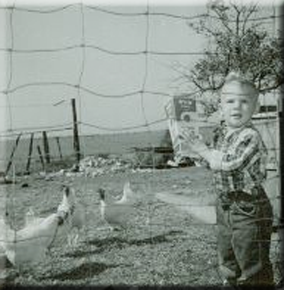 One day we were going through the pasture towards the chicken coop and Grandpa said, “steer clear of the ram because I don’t trust him.” I looked around and wondered which one was the ram. All I could see were sheep. But then one started trotting towards me. And he started running faster and faster. Grandpa had an empty coffee can for the eggs and he stepped between me and the charging ram putting the coffee can in front of him just in time. It buckled when the ram tried to butt Grandpa. He ran off shaking his head and now I knew which sheep was the ram. “I guess we need a new coffee can.” was all Grandpa said.

He liked to tell stories at supper time. Sometimes he would start to tell us a story and Grandma would stop him with her stern voice. “Herman!” She’d scold and Grandpa would switch to another story. Usually a funny story about his growing up. And Grandpa loved to take us with him wherever he went Sometimes he would introduce me to some big, scary grownup. I never knew what to say when a big man would bend way down to shake my hand but if he asked me if I was Paul I could usually nod.

Grandpa was a mailman and on our summer time visits when we were young Grandpa would take each of us with him for the day on his mail route. Grandma would pack us both a lunch and Grandpa would have coffee in his thermos and I’d have milk in mine. Although it would taste a little like coffee. 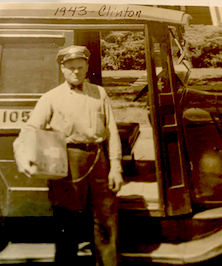 We’d drive up and down country roads and Grandpa would tell me all sorts of things while he drove. And if someone came to his car to mail a later or say hello Grandpa would have them shake my hand like I was somebody very important. Even though I was just a small boy sitting on a wooden bench to make me tall enough to see out the window.

Grandpa was our hero. He would play on the floor with us and take us to the swimming pool and push us in his tree swing and take us fishing. He always seemed to know what would make our visits fun and then he’d had fun right along with us. 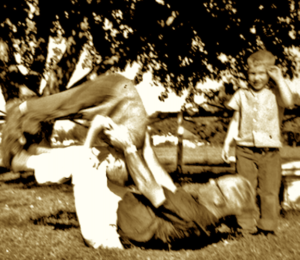 One Christmas Eve our family gathered at Grandpa’s house and we were excitedly waiting to open a few Christmas presents. But I had been so busy eating Grandma’s treats I almost forgot about the presents. My brothers and sister and me had all done our parts in the family Christmas program by reciting Bible verses or singing songs and I thought opening presents would be next but then Grandpa said he needed to go outside and would be right back. I wondered where he was going on such a cold night.

We kids began crawling among the presents under the tree while we waited and then we heard Grandpa coming in the back door. “Ok, kids!” He hollered excitedly. “I have a surprise for you!” He walked into the living room with an old blanket that he set on the floor. “Come here you guys,” he said. We gathered close and he opened the blanket and inside was a very young looking snowy white new lamb. 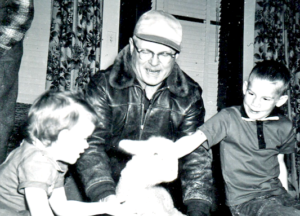 “Who wants to hold him first?” Grandpa asked us. Well I thought that I could handle farm animals. I mean I did almost teach that rooster to crow and that ram was attracted to me so I said, “I will.”

I held on to his neck with one hand and tried to pet his back with the other but the little lamb struggled to get to his feet. “Watch it, Paul, watch it.” Grandpa cautioned me. But the lamb struggled harder to get loose.

“Hold him, Paul!” Grandpa warned me again. But the lamb struggled more and more and just as I lost my grip Grandpa scooped him back up again.

Then I knew Grandpa wasn’t really supposed to bring it in the house when Grandma scolded him. “Herman!” She said in her stern voice.

“Just for a little bit longer, dear.” Grandpa pleaded with twinkling eyes. “I’ll keep him on the blanket.” At his coaxing we all ventured over to the lamb and held him and petted his soft white woolly head. “This is our Christmas lamb,” Grandpa said. “You know the Bible talks about Jesus when it says, ‘the lamb that takes away the sin of the world’.”

“And one day, those who put their trust in Jesus will be led not by a shepherd that leads sheep but by the lamb that lead us to eternal life.”

I looked at Grandma and she nodded with her small smile but never took her wary eyes off the lamb or off of Grandpa.

When I think back to my childhood I’m thankful for my Grandparents who took the time to teach me about Jesus. My Grandma taught us Bible verses and praise songs and my Grandpa found different ways to help us understand
the Bible and about the Lamb of God, sacrificed for our sins.

We read in 1 Corinthians 5.7 “For Christ, our Passover lamb, has been sacrificed.”

When I got back to school after that Christmas and my friends would talk about their Christmas presents and ask me what I got for Christmas, I’d smile and say, “I got to hold the Christmas lamb.”

Revelation 7:17 NIV
For the Lamb at the center of the throne will be their shepherd; ‘he will lead them to springs of living water.’ ‘And God will wipe away every tear from their eyes.’”