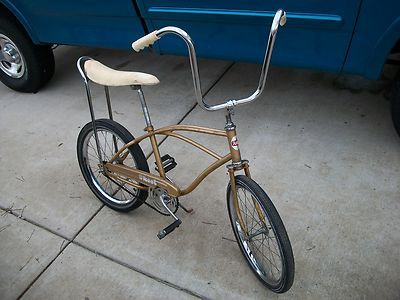 When I was growing up with my younger brother and sister and our older brother Dan we had rules in our family. 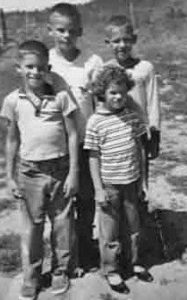 Now rules were hard for me because I had a hard time keeping the rules. You see as soon as there was a rule I wanted to break it; for some reason. But there was one rule I liked and that was the rule I liked to call, ‘Now It Belongs To Me’.

You see we all ran through a lot of gadgets and toys and things and eventually they’d wear out or we’d get tired of them or they’d break. When they did we would put them on a junk pile or in the trash. The rule was: If there was a discarded item that was no longer wanted or being used we could take that item and say, ‘I’m going to fix this up’ and now it belonged to me. Or whichever one of us was going to fix it.

One Saturday morning I was watching cartoons on TV and along came this commercial for a brand new Schwinn Stingray Banana Bike. 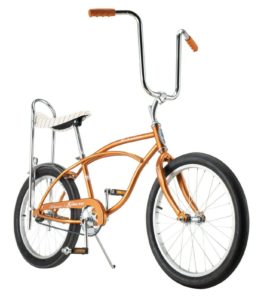 I was very enthralled with that Banana Bike and I really wanted it, but I was a boy of limited means. I mean, I didn’t have a lot of income but I started studying on my situation and I came up with a plan.

I decided the thing to do was to take my older brother’s 20” old worn out bicycle that was too small and make it into a Banana Bike!

First of all I went and talked to Dan. I mean after all technically it was still his bicycle. I said, “I want to take your old bike and make it into a Banana Bike. And now it will belong to me. Is that okay?”
Dan paused a second and thought about it and then he gave me his okay by his signature, ‘I don’t care, whatever’ shrug. And then he went back to doing whatever it is that older brothers do. I’m not really sure what that is.

But since he gave his okay I promptly dug his bike out of the junk pile where it was laying forlornly, all rusty and dirty and wheeled into our shed. The first thing I had to do was take off the wheels and tires and see if I could patch the old inner tubes. You know, because they wouldn’t hold air. Well it was an educational endeavor for me because I learned how to patch an inner tube. Eventually I got them patched and back on the bike and lo and behold they held air! And my project was off and running,

The next step was to take the old seat off. This was a struggle for me because I wasn’t really sure which bolt or nut to loosen which way but I just worked out there in the shed with Dad’s tools telling myself ‘lefty loosen-righty-tighty’ and things like that. I finally got the seat off and then the handlebars. That was another guessing game for me because I wasn’t sure just what was holding the handlebars on and I’m pretty sure I loosened the wrong nut so I tried to tighten it back up. But eventually I had the seat and handlebars off. Next I found an almost half full can of yellow spray paint and sprayed the frame yellow but some of the old red still shined though. Or it was rust?

Now to be honest, I’m not really sure where I came up with the money, being a boy of limited means and all, but somehow I was able to purchase a brand new banana seat and a set of high-rise handlebars. It might have been my birthday money but I can’t remember anymore.

I took them out to the shed and mounted them on Dan’s old bicycle. It took some doing but I finally got them on and they looked right but the handlebars were a little loose so on occasion they would slip a little up and back. And that seat sometimes would just all of a sudden drop down an inch. Which was kind of scary. I had to carry Dad’s crescent wrench with me wherever I went so I could adjust the seat and handlebars and tighten them back up.

Next I had to work on the chain. It was very rusty and not in good shape. I priced a new one but it exceeded my remaining Banana Bike Budget which  by this time was only like 75 cents or something. My Dad came to my rescue by showing me how to use some lubricant and an old rag and lots of elbow grease to loosen up that old chain and get most of the rust off. Now I did get into trouble with my Mom during this phase of the project for leaving that rusty, oily chain on her front room rug. And I learned that was not where I should be working on my chain restoration.

I finally got the chain working pretty good but somehow I lost the snap link for it and I couldn’t get the chain all the way back together. Dad came to my rescue once again by finding another old chain out in the junk pile and he drilled out a link and showed me how to use a small nail to hold the links together. “Temporarily,” Dad said. It did work but I had to carry a few nails in my pockets along with the crescent wrench just in case.

I couldn’t do anything with the pedals. They worked but they were missing the black rubber pieces. I could still pedal the bike by just using the post. It was just a little dangerous, though, if I tried to stand up and peddle and the handlebars slipped. However I got my Banana Bike working and I was able to ride it around the yard. It was looking pretty good. And I thought I had a really cool Banana Bike. 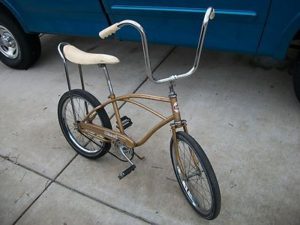 Now in a way we are all rusty, broken, unwanted pieces of junk longing to belong to someone who will rescue us in our brokenness, and who will make us whole. Well there is good news! Psalms 147.3 in the Bible says, “He heals the brokenhearted and binds up their wounds.” And Who is the Healer? Well, that is God.

Yes the Lord sees us in our worthless, unusable state and offers us new life that comes when we trust Him for what He did for us on the cross as payment for our sin. He makes us new and claims ownership of us. It says in 1 Peter 2.24, “He himself bore our sins in his body on the cross.”

And when we put our trust in the Lord Jesus we become His in a loving relationship. Like it tells us in Romans 14:8b, “So, whether we live or die, we belong to the Lord.” And that’s not all. Soon we will be made perfect without the frustrations and corruption of sin. We won’t just be a partly new old bike fixed up we will be completely, new, perfect and whole. Just like it says in Revelation 21:5a, ” Then He who sat on the throne said, “Behold, I make all things new.””
And that’s exciting news!
Well within a year or two of fixing up my Banana Bike we moved out of state and I’m not sure what ever happened to it. I know I had plans for it. You see in a comic book I read an ad for a bicycle handlebar mounted BB machine gun. I really wanted that. I thought it’d be very cool to have that so as I rode around on my Banana Bike I could use it to shoot varmints and things. But for some reason I never did get that bicycle handlebar mounted BB machine gun.