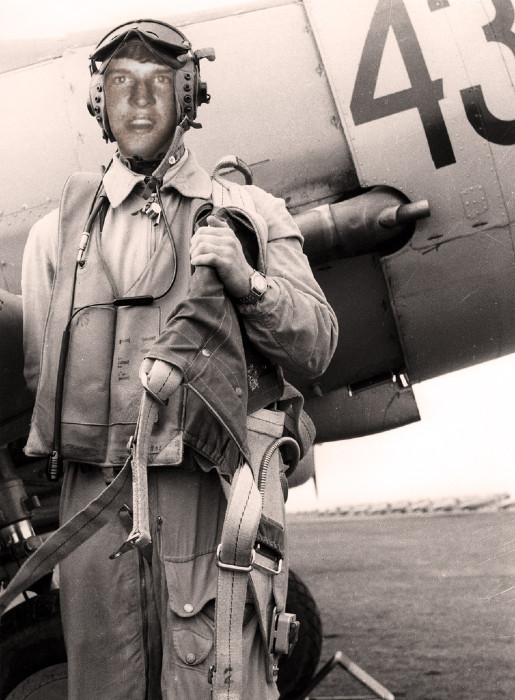 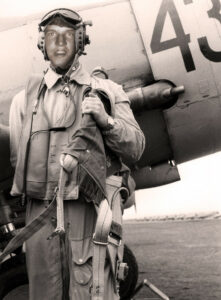 On a bright Sunday morning shortly before my 15th birthday, several cadets from my Civil Air Patrol squadron showed up at Scott Air Force Base to board our turbo prop C-130 transport plane. I was excited for the airplane ride but a bit apprehensive for the rest of the week. But there was a rumor that during the week we’d be allowed a ride in a jet. And I was ready for that. 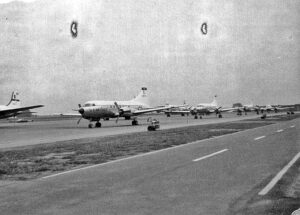 We were headed to northern Michigan to an Air Force Reserve base located close to Lake Huron. First though, we had to get through some rough air over Illinois on our way to Great Lakes Naval Air Station close to Chicago. The flight was quite bumpy and the teenagers on our plane made liberal use of some blue, plastic airsick bags. I was a little proud of myself for not surrendering to the nauseous smell that filled the plane.

But upon landing near Chicago, I can’t remember who, some adult maybe, selected me and my friend, Dennis to “go get rid of the airsick bags.” He didn’t tell us how or where but said there was a cart we could load them onto outside the C-130 door. We made several trips gently carrying our smelly blue bags down the steps of the airplane. Lacking instructions and never having had this assignment before we pushed the loaded cart into a building that looked like an airport terminal.

Dennis and I tried to look confused so that maybe someone would help or at least give us some advice but everyone avoided eye contact and our pile of blue sacks. Dennis asked me for the third time, “What are we going to do with them?”

“Maybe we could find a bathroom and flush them down the toilets?” I answered not being very sure.

Well…our idea was clearly unsuccessful as the blue bags just floated in circles in the toilets. “Maybe we should’ve just chucked them in that trash can,” Dennis suggested. “We could put the rest in there.”

“Yeah, and get out of here before somebody comes in.” I added. So we did. The trash can and toilets were now overflowing with blue bags and we quickly made our way back outside. We hurriedly climbed back in our plane and mixed in with the crowd hoping no one would know what we just did.

Late in the day we landed in northern Michigan at the Air Force base that would be our home for the next week. They separated the boy cadets from the girl cadets and then formed us into groups that would be assigned to a barracks. Eventually our group got larger and larger until we had enough to fill one barracks. Next we were marched to our particular building and were assigned bunks. They issued us bedding and blankets and an officer to show us how to make up our bunks.

“A quarter will bounce off of a properly made bunk.” A cadet officer told us with great authority as he threw down a quarter on the bunk he just made. I think it sort of bounced. Maybe.

“And the extra blanket is to be folded into what is called a cadet ‘E’”. He quickly folded the blanket for a demonstration but several of us asked him to show us again. Reluctantly he did.

It took me a few minutes but finally my bunk was made up. I wasn’t so sure about my blanket being folded in a cadet “E”. I didn’t have a quarter so I didn’t know if one would bounce of my bunk, but nobody seemed to care. We were sent back outside to form up for evening chow and then marched at a trot to the dining hall.

I sat with my plate of food and started to relax but then we were told we only had 10 minutes to eat. And on it went. One new experience after another until finally I laid my head on my pillow and tried to sleep. Lights out at 9 and a wake up call coming at 5 am. Not what I was used to. And it was still light out outside.

There were lots of tasks we had to do, such as cleaning our barracks and bathroom, washing the old blue Air Force bus we rode around in, learning when and when not to salute and finding out what Lake Huron tasted like while swimming in it and lots and lots of marching to prepare for the parade on the last day. Mostly it was fun and I got to know a few more people. Dennis and I were together a lot so we got to know each other pretty well. He was quiet and unsure of himself but easy to be around. I had had to sit next to his sister in study hall at school and she was very bossy and not easy going. So I was pleasantly surprised by Dennis’ personality.

I met several interesting guys from here and there when we were allowed time off in the evenings before lights out. One guy was a guitar player. He was really good and could pick out almost any tune. Once he played Yankee Doodle and Dixie both at the same time. Somebody asked him a question and he had to stop and he said, “I can’t think or talk while I’m playing.” I played guitar a little myself but realized I had a woeful lack of talent next to this guy. I tried to watch his fingers to see if I could maybe pick something up but I never could. 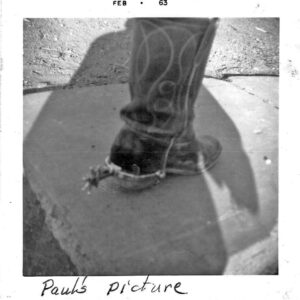 Another boy I followed around one evening had a fancy looking little camera. It was a Leica I found out and another guy had a Pentax. When the Pentax owner told the Leica owner how to set up his camera for a good shot the Leica guy said, “I know, I know. I’m a camera bug, too.”

And they would debate about who had the best camera as they discussed aperture settings, F-stops and film speeds while I tried to learn from them. I liked taking pictures and wanted a really nice camera some day. 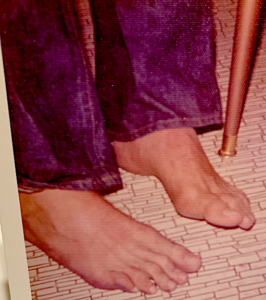 I took a lot of pictures growing up and tried some artsy things like my Cowboy Boot and Spur photo or Bare Feet On A Summer’s Day. But these guys made me realize I had a lot to learn.

One evening there was guy sitting on the steps of our barracks with a sketch pad and several cadets were standing around watching while a cute girl was posing. The artist deftly sketched out a caricature of the girl and everyone told him what a great job he did. The girl looked at his sketch and smiled. “This is great! How did you learn to do that?” 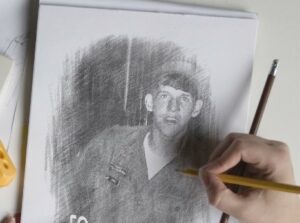 The artist shrugged and said, “I just picked it up.” And the girls kept asking to be next. I couldn’t get close enough to see him work but was able to see several of the finished caricature sketches and wished he’d do one of me. I could do some sketching but nothing like he did. Just my sad horses and messy motorcycles. 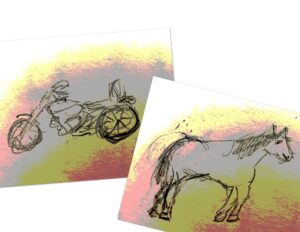 We had a big marching parade on Friday afternoon with speeches from adults. I don’t remember what they talked about, but I remember the sweat trickling down my neck out in the hot sun. Then it was time to get ready for the big dance.

Dennis wasn’t feeling very well. He was coughing and said his head hurt. I was excited to go listen to a live band. I had never done that before. Dennis asked me, “Do you think I should just stay here and lay on my bunk? I’m really feeling lousy.”

I wasn’t sure what to tell him. I thought he would know if he felt good enough to go and I sure wanted to go. But he asked me again. “Maybe I should just stay here and try to go to sleep early. What do you think?”

I was starting to feel like I should stay with him if he felt that bad. And then I caught on he was wanting to go to bed but he just wanted someone to tell him to. “Yeah,” I finally said. “Maybe you should just lie down and try to get some sleep. You want me to stay here with you?” I asked but not very enthusiastically.

Dennis crawled into his bunk and I walked over to the dining hall with a couple of other guys and we got some soft drinks and waited for the music to start. The band finally had their equipment set up and their instruments tuned and began playing pop music; loudly.

I watched them play and enjoyed seeing a live band and soon a lot of the kids began dancing. The guys I knew at the table dwindled down to about three or four and then Mike, one of the guys from our home squadron came by with a pretty girl in uniform.

He shouted over the music as he introduced her to us and we all shuffled to our feet and nodded at her. She didn’t seem too impressed with us and then Mike pulled out a chair for her to sit in. We all sat there not knowing what to say while Mike and his dance partner had their soft drinks and then we stood up again to awkwardly say goodbye.

I was impressed with Mike’s suave ability to meet a girl, ask her to dance and then introduce her to his friends. I looked at the guys at the table and wondered if they were thinking the same thing. They looked like they were as they wistfully looked around the dining hall at the girl cadets standing and sitting here and there that none of us had the courage to go talk to or ask to dance.

Near the end of the night I was began to wonder how Dennis was doing and thought I really should check on him. I got up while the band was still playing. I nodded at a girl standing between me and the door and she smiled hopefully, I thought. But now I was on a mission and I kept heading towards the door.

I got back to the barracks and saw Dennis was sound asleep. He looked like he was really out so I didn’t try to wake him. I hung up my Class A uniform and crawled into my bunk. Finally I drifted off to sleep and was glad we were being allowed to sleep in until 6:30 on Saturday morning.

Later that day we boarded our Air Force plane for the ride home and I watched Michigan turn into Illinois and soon we descended for a quick stop in Chicago. Dennis and I stayed in the transport trying to be inconspicuous wondering whatever happened to our blue bags. We warily watched the door but soon it was on to Scott Air Force Base for the rest of us. 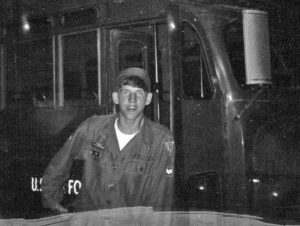 My Mom and Dad watched me come down the steps from the C-130 and commented on my nice tan. It was only on my face since most of the time I had my uniform and cap on.

Psalms 25.4-5 Show me Your ways, O LORD; teach me Your paths. Guide me in Your truth and teach me, for You are the God of my salvation; all day long I wait for You.…

James 1.4 Allow perseverance to finish its work, so that you may be mature and complete, not lacking anything.

Micah 6.8 He has shown you, O man, what is good. And what does the LORD require of you but to act justly, to love mercy, and to walk humbly with your God?