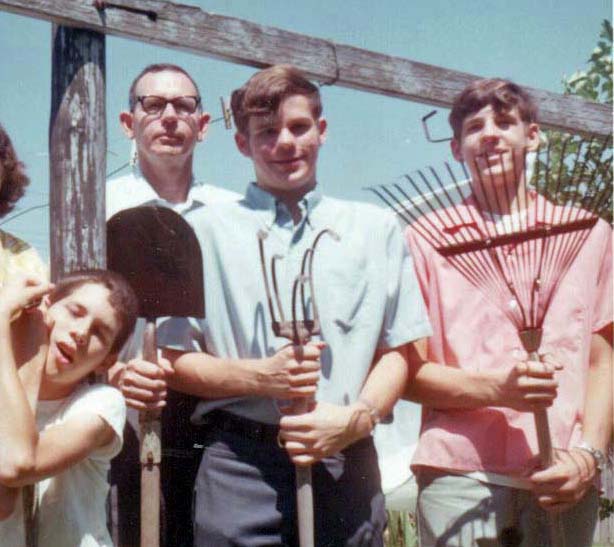 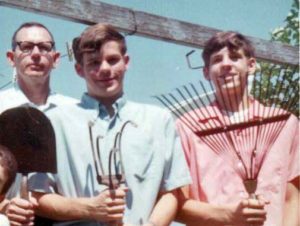 The summer I turned 13 our family moved from rural southwest Kansas to a suburb of St. Louis on the Illinois side. After a couple months of renting a house we moved into our newly purchased home on Clinton Avenue.

Dad set out to fixing up the house and yard the way he wanted, which involved quite a bit of work. But he had three willing sons to help him. Well…he had three sons that helped him, sometimes reluctantly.

One of Dad’s first projects was the driveway. There was a nice garage but between the garage and the house and the cement driveway was only grass. When I came home from a hard day of school one afternoon I discovered a huge pile of crushed rock sitting on the grass in front of the garage. I assumed Dad had a plan. And he did.

At supper that night, Dad announced that after school and on Saturdays he expected me and my older brother, Dan to spread the crushed rock between the garage, the house and the driveway. He had put out a rope marking the boundaries. He said it would go quickly if we worked at it and it would help us to develop some muscles. He made it all sound so easy and fun that I was a little excited. I could just imagine all those girls in my new school admiring my well toned muscles. I had a vivid imagination you know. 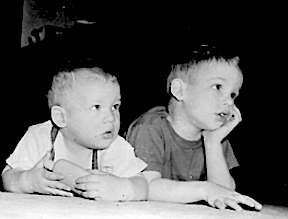 The next day after school Dan and I changed into our old clothes, had a snack and went out to survey the pile of gravel. It seemed huge. Dan went in the garage and came out with a couple shovels and then we went to work. I scooped up some of the rocks and flung them as far as I could and then grabbed another scoop and another. I was sure I was making headway but when I stopped to catch my breath the pile of rocks seemed higher than before and the grass looked the same.

With all of the determination I could manage I dug into the pile and came out with a big shovelful. Straining under the weight I turned to throw them out into the grass that would soon be our driveway. But they only went out about a foot. I sighed and looked at Dan who was smiling.

“This is going to take forever…” I sighed.

“And the gravel is so heavy!” I whined as I tried to lift another shovelful.

“Well…” Dan advised as he flung his rocks out. “Don’t put so much on your shovel. Just take smaller bites.”

“But it will take forever!” I protested.

“I don’t think so,” Dan said as he scooped up more gravel. “Remember the tortoise and the hare.”

I looked at Dan and wondered what he meant. I couldn’t imagine a hairy turtle. But I tried to scoop a bigger shovel and as I turned to throw it I slipped and fell. 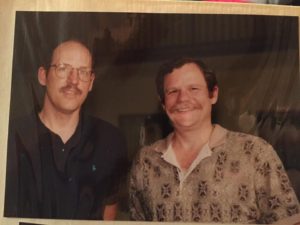 Each afternoon, after school we would go out and scatter crushed rock. We did make some progress and I finally learned to not fill the shovel so full like Dan said. But by Friday evening there was still more than half the pile of gravel left. I was dreading what Dad would say at suppertime.

But that evening Dad smiled at us and said, “You boys sure have been working hard. You have almost half the gravel spread. I bet you’ll get it finished tomorrow…If it doesn’t rain.”

Well I prayed for rain that night and although it was cloudy on Saturday it wasn’t raining. Dad came in my bedroom early in the morning, “Rise and shine, Paul! The sun is up, the birds are singing and the day is waiting!”

Sleepily I climbed out of bed and put on my dusty, dirty jeans and soon found myself out in the early morning with my shovel and my brother again. “We’ll never get finished!” I whined as Dad drove off to do some errands.

“Seems that way,” Dan nodded. And we kept throwing the gravel. “But we are making progress. See? We’re almost to the rope on this side.”

What seemed like an eternity later Dad drove in the yard and smiled at us. “Keep going boys! I’ll be right out.”

Dad did come out and he grabbed the rake. He began pulling the rake through the gravel and giving us some instructions. “Throw some over here,” he’d point. And the pile got smaller and smaller.

We followed him in the house and he dumped a sack of Hostess pies on the table. “I’m going to have a Dr. Pepper, you want some?” Pretty soon we were laughing and feeling energetic from the sugar.

And back out to the gravel pile we went. Dad had me rake where the gravel wasn’t quite even and he began throwing big gobs of gravel here and there. I started enjoying the job, working with my Dad and my older brother and I did my best to smooth the gravel into one big layer.

The last two hours of work went fast. Dad was teasing us and telling us we were doing a good job. I felt good and was happy to be a part of a team accomplishing something. All of a sudden Dad stopped shoveling.

“Well, boys,” he said as he looked around, “I think we got it licked!” 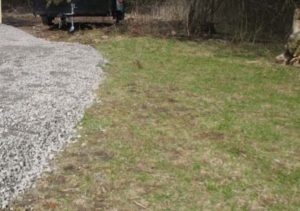 I looked around and all of a sudden the driveway looked so much better. The crushed rock covered the grass and looked nice and even like a driveway should, I thought.

“You boys can go in and get cleaned up and I’ll put the tools away.”

While we were in the bathroom, washing our hands I looked at Dan and said, “Well, that wasn’t so bad. Almost kind of fun.”

Dan wiped his wet hands on the towel and said, “Not so bad at all…but I bet Dad will have another project for us pretty soon.”

Well that night at suppertime Dad looked at us and said, “You know I’ve been thinking…that old, dead tree should really be removed. Maybe next week we can start in on that. It will make the yard look a lot better if we got rid of it.”

I looked at Dan and he looked at me and we groaned. And then we laughed.

Colossians 3.23 NLT Work willingly at whatever you do, as though you were working for the Lord rather than for people.

Nehemiah 4.6 NIV So we rebuilt the wall till all of it reached half its height, for the people worked with all their heart.

Matthew 16.27 NIV For the Son of Man will come in the glory of His Father with His angels, and then He will reward each according to his works.