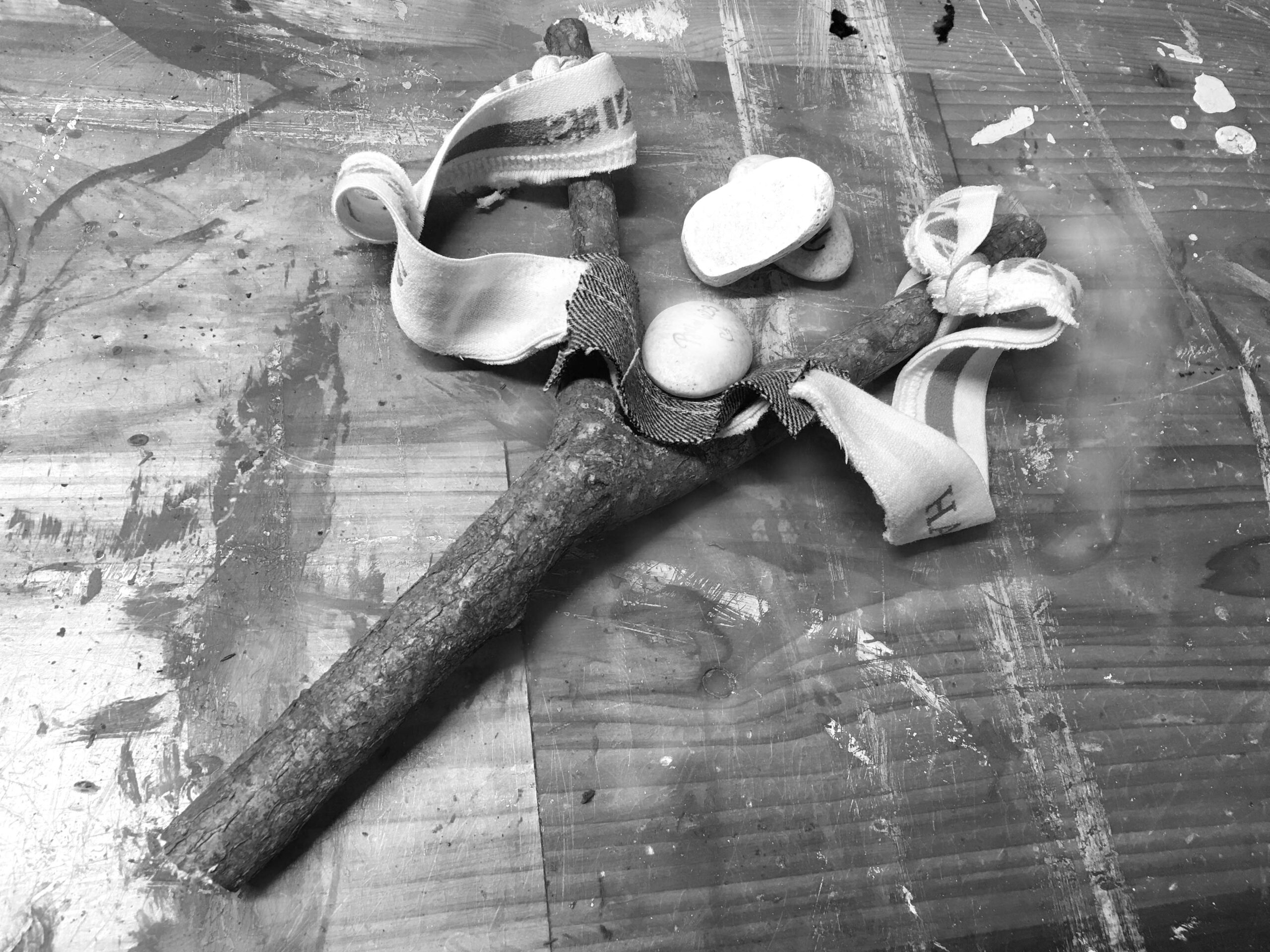 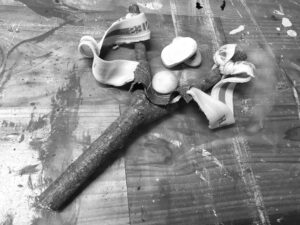 It all began with Dad helping me to fix the bicycle tire. “It probably needs a new inner tube,” Dad said as he loosened the nuts on the front wheel. “I think we’ve patched this one a bunch of times.” He said the word, bunch, with a punch.

He slipped the wheel away from the upside down bike frame and grabbed a screwdriver. “We’ll use this big flat bladed screwdriver.” He said. “People who work on bikes all the time have a special tool, but this will work for us ol’ shade tree mechanics.”

I looked around and noticed we weren’t under any trees so we weren’t in the shade; and then for a while I thought about what an inner tube was. I had seen Dad check the tubes on TV sets and didn’t think something like that would be inside a bicycle tire. But then again I wasn’t sure being only a young kid. It really was my older brother’s bike that now I was riding. I had never seen Dad patch the inner tube before.

Dad loosened the tire from the rim and then began sliding out a black, rubbery looking thing with a few orangey colored patches on it. He fished in his pocket and pulled out a small shiny metal thing. “This will take the stem out of the inner tube then we’ll blow it up and check for leaks. A few minutes later he shoved the slightly inflated inner tube in the water of the old washtub. “Yep,” He announced. “It’s got a bunch of leaks. It’s a good thing I bought a new one.” Once again he punched the word bunch.

“What?” I asked thinking I’d rather ride the bike. I mean it was just sitting there, waiting for someone to ride it around the driveway.

“You’ll see. It’s a stick with one branch that opens up to two branches.” He held two fingers up spread apart.

“Oh,” I nodded still not quite understanding.

A little later Dad climbed down from the old cottonwood tree with his tree saw and small branch. “You see the Y?”

Dad cut some more on the branch then he went back to the inner tube hanging on the bike’s handlebars. “We’ll cut this into some strips. And then we’ll need a piece of leather. Where’s those old shoes too small for you boys.” 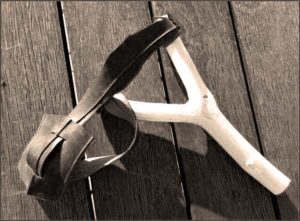 I shrugged then thought for a minute. “I think maybe they’re in the barrel in the shed.” And they were. Pretty soon Dad handed me the most fancy sling shot I had ever seen.

“Don’t shoot the kittens with it,” he warned, “or shoot towards the house.”

“I won’t,” I promised, I found a small pebble in the driveway and pulled back the rubbery sling. It hit my wrist with a painful snap.

“You have to hold your arm straight out,” Dad said as he showed me. The rock banged off the washtub when he let go.

My brothers and I had lots of fun for a couple days shooting at fence posts and rabbits and tree trunks…but then we lost track of the sling shot. We looked and looked for it but couldn’t find it.

About a year later I sat enthralled listening to our Sunday night lesson time at church. The subject was the mighty shepherd, David and his sling shot and his staff and shepherds’ hook.

1 Samuel 17 49-50   Then David reached into his bag, took out a stone, and slung it, striking the Philistine on the forehead. The stone sank into his forehead, and he fell facedown on the ground. Thus David prevailed over the Philistine with a sling and a stone; 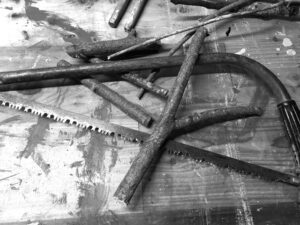 The next Saturday I was up in the cottonwood tree with Dad’s tree saw. It was harder than I thought but I finally managed to cut off a small branch with a ‘Y’ in it and not fall out of the tree.

“What are you doing?” My little brother, Tim asked me as he looked up at me.

“I’ll tell you if you put away Dad’s tree saw,” I said. Tim looked at me doubtfully.  So I shimmied down the tree trunk, “I’m making a sling shot.”

“Like David?” He asked as he reached for the saw, “Can I shoot it?”

“Sure.” I said, “If we can get it working maybe we’ll make you one.” I added, sounding like a big shot.

I didn’t know where any old inner tubes were so the next best thing we decided… was to ask Mom.

“We need something stretchy, Mom.”

“What do you mean,” she said as she sorted through the laundry.

“Something to make a sling shot out of,” Tim volunteered before I could stop him.

Mom cast a wary look at us, “Something stretchy, huh, I think I know.” She held up a worn out pair of my underpants. “These are still stretchy. Sort of.”

Pretty soon, after Mom’s well intentioned help, Tim and I were headed out the backdoor with our sling-shot, “Don’t shoot each other with it,” Mom cautioned.

Once outside we looked at the funny looking sling shot. Mom had cut a patch out of some old blue jeans for a pocket and tied the worn out underwear elastic to the sticks. “I don’t know,” I said to Tim as we looked for the right rock. “It’s not like Dad’s.” 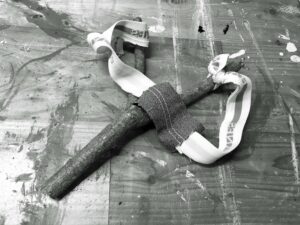 “Here’s a good rock,” Tim said hopefully as he handed it to me.

“Okay!” I said as I set it in the blue jeans pocket. “You have to hold your arm out straight and aim through the Y,” I instructed, trying to sound like I knew what I was talking about.

I pulled back the pocket and let go. The rock didn’t snap out like it did from Dad’s sling-shot. It barely went a couple of feet and fell to the ground, “Let me try,” Tim said. “Maybe I’ll get a smaller rock…”

The sling shot didn’t have enough strength for even the smaller rock. And it didn’t look very intimidating with the underwear elastic and blue jeans pocket either. Pretty soon we gave up.

“Maybe Dad can help us fix it.” Tim suggested.

“I don’t think we have any old inner tubes,” Dad said later. “But the kind of sling shot David used in the Bible we could make. It had leather straps and he spun it over his head and let go of one of the straps.

“Yeah!” Tim and I exclaimed.

“I’m pretty sure with that thing you won’t be able to do much.” Dad said looking at our underwear elastic sling shot.

“Maybe you could make a bad guy laugh so hard you could win in a fight,” Dad said with a smile.

2 Corinthians 10.3-4 For though we walk in the flesh, we do not war according to the flesh. The weapons of our warfare are not the weapons of the world. Instead, they have divine power to demolish strongholds.

Ephesians 6.17 And take the helmet of salvation and the sword of the Spirit, which is the word of God.